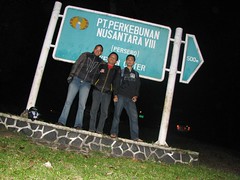 Character and Attitude of Indonesian Youth

My thought starts from my English lecturer's (Ms. Flo) question in class about Indonesian youth's character and attitude. She was confused why today's youths have bad attitude and weak character. And Mr. Budi Rahardjo's article here works as catalyst. So, I wrote this. In English, dislike usual, because she is my English lecturer, absolutely.

The complete question is: "Why today's youths have worse attitude and weaker character than their previous generation?". I just trying to analyze, and answer with my opinion. Okay, someone's attitude and character mostly built by the environment. And it is clear, today's environment is changed at all. People grew, new technologies invented everyday, people are changed (absolutely, people's lifestyle is), and people changed their environment. Modernization kick traditions out. Industrialization take people's spare time. Here I tried to discover some reasons:

Televisions's Commercial Ads
From about two decades later till now, TVs spread around the world. In last 10 years in Indonesia, TV stations grew fast. From just a few station to more than 10 national TV stations. From half-day broadcast, to a 24 hour TV broadcast. Today, who are never watch the TV? mostly people do. Who powered these stations? Commercial Advertisements! Mostly TV stations are free service, just few of them are the paid one. Everyday, every hours, (even every minutes) the watchers watch ads in their TV. These ads changes the people. These turn watchers to consumerism. And, hedonism is a new lifestyle. Worst, people will do anything for this.

What will happen for this year's Apple WWDC (Worldwide Developers Conference) on June 11-15 at San Francisco? Usually, Steve Jobs will kick-off the WWDC with his keynote. And he used to use this event to launch, annaunce, and introduce new products and corporate news. These are just my predictions what Apple will do right there:

iPhone Launch
iPhone was introduced in MacWorld San Francisco '07. And Apple said that will brings the iPhone to the stores in June 2007. Cingular (AT&T) has ready to market iPhone. So, WWDC '07 is the best event to announce it.

MacBook Pro upgrade, with Santa Rosa
Intel had launched their latest technology, "Santa Rosa" platform, also known as "Centrino Pro" in PC world. Apple used to implement the latest technology on their products. MacBook was upgraded couple weeks ago. Today's MacBook Pros are still using Intel's 667MHz FSB technology while "Santa-Rosa" platform use 800MHz FSB technology. So, the next upgrade will be Santa-Rosa based MacBook Pros with LED display backlight. What about Mobile Radeon HD 2000 series?