Time to Replace Nike+ SportBand, or Not? 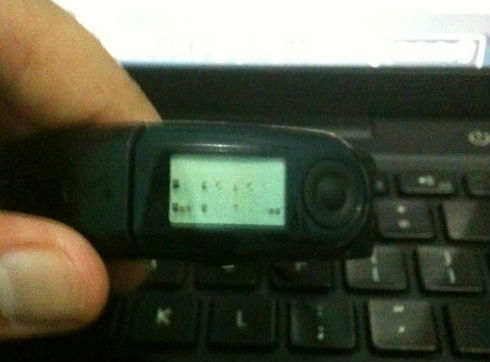 I missed last Sunday morning run. Then, I did the next day (16/04), Monday morning run in Mega Kuningan district of Jakarta. Met Asep Hadian that was train for his first marathon, but I just did easy jog for 3.2 km. Everything is fine, as usual. I tracked my run with Nike+ Sportband paired with shoe sensor and Polar Wearlink+ heartrate monitor.

Finished the run, and bought breakfast in the neighbourhood. As usual, over the breakfast, I plugged the SportBand (technically, the unit is called SportBand Link) to my MacBook's USB port to sync the data and read the statistics.

The Link's display showed "CHRG" (which means it is currently charging the battery), but the Nike+ Connect did not shown up nor launched. I unplugged the Link and plugged it to another USB port. Still "CHRG", and still no Nike+ Connect. I launched Nike+ Connect app manually. It said there's no device plugged. Then, I restarted my Mac, to make sure my Mac is okay.

While the Mac was restarting, I cleaned the "USB electrode" on the Link. Maybe the electrode was dirty and caused the USB data not connected to the computer. After the reboot, the problem still happened: not detected. Then I launched the Nike+ Connect app manually, and still said there's no device plugged.

After waiting for few minutes, the Nike+ Connect finally "detect" my SportBand link. But, it said that my link was in "unusable state" and its firmware had to be "updated". Then, I followed the instruction to update it. While updating the firmware, the Link's screen show scramble (randomized pixel), but the firmware update process still running. I waited until the process finished.

When the update finished, the Link's screen goes blank. No response when I push any button on the Link. Nike+ Connect app also did not detect the link when plugged to the Mac's USB. Link's display still blank.

I tweeted this case, and @nikeplus recommended to do the "reset" with holding both toggle and record button for 10 seconds. I did it, and nothing happened. Display is still blank.

I bought my SportBand in December 2009 from Nike Store Sun Plaza, Medan. It has tracked my run for more than 800 km, and also thousands heartbeats. If people mostly got the sensor dead first, not on my case. The bundled sensor still works well. In recent weeks, the SportBand not shows any symptoms. Even battery issues. So, I don't think the battery is dead.

Okay, my SportBand is considered dead. I still have my iPhone 3GS that I can use to track my run, paired with the shoe sensor. But, I can't paired the iPhone with heartrate monitor. So, the Polar heartrate would be useless. Should I buy the new Nike+ SportBand? Probably yes since I prefer to use SportBand that bringing iPhone while running. Even with the armband.

SportBand is relatively outdated. Moreover when SportWatch with GPS tracking is available. Both SportBand and SportWatch are compatible with my Polar heartrate. So, SportWatch is also a nice alternative, especially after the price was cut from 199 USD to 169 USD, it becomes more interesting upgrade of SportBand.

Would I buy Nike+ SportWatch? As an upgrade, yes. But, since it is currently not available in Nike Store Indonesia and @nikeplus have not yet announced a release date for the Nike+ SportWatch GPS in Indonesia, I have to buy it from Amazon. It will cost more for shipping, and I have to wait for couple week. Even with price-cut, it costs more than twice of Sportband. This could be another investment consideration.

So, for a while I'll just stick with the iPhone and armband.

20757 views. This post is copyrighted — materials from other creator are explicitly mentioned. You may use any information for non-commercial purpose with credits and backlinks. For commercial purpose, please let me know first.

I had enough wearing nike armband, in addition to the lack of accuracy, I also experienced the same problem with you. unfortunately I was more or less fortunate, since I bought armband in December (Singapore) and just within a few MONTHS the problem appear. so now this stuff is useless.

therefore for the measuring instrument, I rely on Garmin only. this is their field.

but no one beats nike in matters of fashion

I had the same problem last night. However, I was lucky in that the reset method fixed it. I know this is a bit later than you originally posted, but I hope you got it all sorted out.

Thanks for sharing, Abe. I already had did reset after it crashed, but nothing happens. Considered it already dead after 2 years and more than 800 km, it's okay for me. Beside, I already got Nike+ TomTom SportWatch

Try cleaning the four contacts on the sportband link. They can get very dirty.

Dear Richard, I had cleaned the USB contacts at first place. Still failed.