Speed Up Your Macs with Memory Upgrades 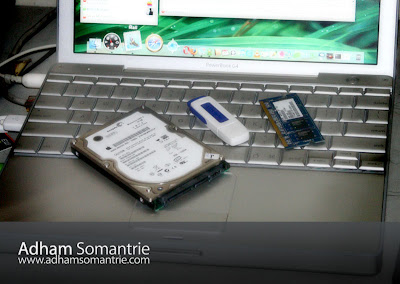 Today's Apple Macs is shipped with big enough capacity of memory (RAM). A gigabyte (1 GB) or two gigabytes (2 GB) are by standard default configuration. Two (gigabytes) is good enough for a daily computing. Prior Macs, just "bundled" with a half gigabyte (512 MB) or just a gigabytes of RAM.

For today's modern operating system and application, I think couple of gigabytes is a standard requirement. You can stay calm with the standard 2GB. But, if you have less, I doubt. Even more with Leopard. I use PowerBook G4 with 1.5 GHz processor's clock, equipped with "maximum" 1.25GB. And, it's have a good performance on Tiger. And a Intel-based Mac with 2GB of RAM with a running Leopard on it. It produces a "powerful" performance. My systems is good enough for a "daily" computing.

But, not for hi-end applications, like photo editing with Adobe Photoshop CS (in my PowerPC) or Adobe Photoshop CS 3 (in my Intel Mac). I got running out of memory. Even two gigabytes is not enough for hi-resolution photos from my EOS 350D (it just eight megapixels). 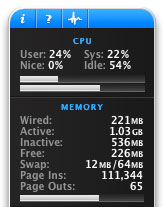 I'm using a status monitor to tracking my memory usage. So I can see how much amount of my memory that is used by the system. And, the important thing: Page Outs.

And, it makes your system goes slower, and slower.

While the cost of a memory is goes cheaper, and still goes cheaper. I recommend you to upgrade your memory when possible if you have a problem with performance of your Mac due to lacks of memory.

Latest "Santa-Rosa" platform based Macs can accommodate massive memory capacity up to four gigabytes (4 GB). Prior Macs systems support less maximum capacity, about three gigabytes (3 GB). And the first Intel-based Macs system, that use "Core Duo" technology, only support just two gigabytes (2 GB) of RAM. MacPro is an exception. Since MacPro is built for the hi-end and most powerful users. It supports up to eight pieces of four gigabytes. That means 8x4, 32 GB!

2 GB is enough for common use. You'll need more for more advanced use, 4GB is my standard preference for power-user. Except, your system have RAM limitation like the Core Duo system.

With Intel, Mac goes more 'PC'. You can use the same memory that used by PC. As usual, not all PC's memory can run well on the Mac. You need more information: is it run well on a Mac?

For a better choice, you can use Apple Memory that designed for Macs. Maybe, it cost more, but it's guaranteed to work. Mac RAM is almost the same with PC's, but it has tested: running-well on the Mac System.

You can go to the Apple Store and buy expensive memory. But, you have another alternative. Buy computer memory on other store (or, online store). They have more competitives prices, and also, more choice.

7896 views. This post is copyrighted — materials from other creator are explicitly mentioned. You may use any information for non-commercial purpose with credits and backlinks. For commercial purpose, please let me know first.

Crossposted on: AdhamTech.Net - Speed Up Your Macs with Memory Upgrades