If you need additional keyboard for your Mac, it is not much 3rd party keyboards available. There's no cheap keyboards like on a PC. The standard USB Apple Keyboard is USD 49. The cheapest keyboard you can find on Apple Store is Kensington SlimType Keyboard for Mac which is offered for USD 39.95.

For an alternative, you can go with PC's keyboard. USB is a must, you can't go with the PS/2 ones. For an example, a Logitech Ultra-Flat keyboard that sports USB connector is around USD 13, and also available in white!

With that keyboard, you will get a functional keyboard for you Mac for less, and you will get the "real delete" button. But, you also will miss some keys like eject, brightness control, and volume control keys.

The problem is not on the logo, but the layout. You must adapt the new layout, that means the new position of "Apple" key that used for sooooo many shortcuts in Mac. Like the "control" keys on the PC, switchers

All you need is, just re-map the button! Map the Windows key for option key, and the Alt key for Command key.

To do this, just open System Preferences, then click Keyboard and Mouse. Choose keyboard options, then click "Modifier Keys..." button. Remap it: Command key as Option, and Option key as Command. 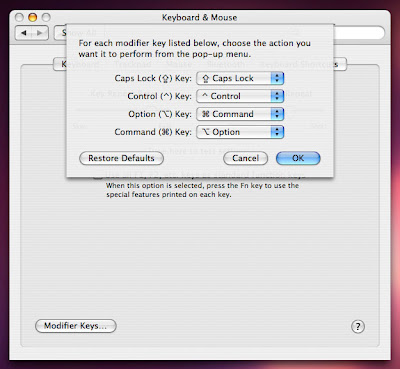 But, you have to restore it to defaults in order to use the original designed for Mac keyboards.

Another thing you have to know, Logitech Ultra-Flat keyboard has non-standard layout. It has "contextual menu" key between left Windows key and left Alt key.

29568 views. This post is copyrighted — materials from other creator are explicitly mentioned. You may use any information for non-commercial purpose with credits and backlinks. For commercial purpose, please let me know first.